NEW ORLEANS (July 12, 2019)– Trey Morris, an auctioneer from Murray, Kentucky recently won the 2019 NAA International Auctioneer Championship (IAC) after competing among 68 participants in the men’s and women’s division from the United States, Canada, Mexico and Ireland. The competition, which was a part of the National Auctioneers Association’s (NAA) 70th Annual Conference and Show, took place at the Hilton New Orleans Riverside in New Orleans, Louisiana. Seven judges scored contestants on poise, command and bid calling in a preliminary round followed by an interview round with three industry questions, and a final bid-calling round for the top 15 male competitors.

“I’m elated and overjoyed to be chosen as the 2019 Champion,” Morris said. “It has been an absolute dream come true. The NAA taught me so much about auctioneering, but also about leadership and professionalism, and I will work diligently to fulfill the mission and purpose of the National Auctioneer Association over the next year and throughout the duration of my career.”

Morris will represent the NAA and the entire auction industry throughout this year with his co-champion from the women’s division, Morgan Hopson of Oklahoma City, Oklahoma. Both will serve as the ambassadors by speaking to other trade groups and associations, as well as national and international media about the power of the auction method and the professionalism of members of the NAA. One highlight will be a special trip to conduct a toy “fun auction” for children at St. Jude Children’s Research Hospital in Memphis, TN.

Morris is a first-generation auctioneer and real estate sales associate based in Western Kentucky. He is an announcer for Barrett-Jackson, The World’s Greatest Collector Car Auction®, which is featured on the Discovery networks. Morris also works with not-for-profit organizations including St. Jude Children’s Research Hospital, Juvenile Diabetes, American Heart Association, and the Ronald McDonald House to raise money through live auction event and special appeals.

“Winning this award is such an honor,” Morris continued. “It was a privilege sharing the stage with the best auctioneers in the industry. I’m a true testament to the belief that success comes when you step outside of fear and pursue the one thing that scares you to death. Today I stand on the other side of fear as the 2019 International Auctioneer Champion. I’m looking forward to representing auctioneers and auction professionals around the world. I’m incredibly grateful to represent as an industry leader and champion.”

To schedule bookings, appointments or for any additional information, please contact info@morrisauctioneers.com or call (270) 705-4388 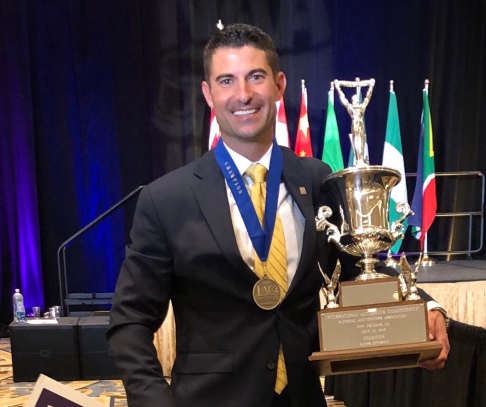